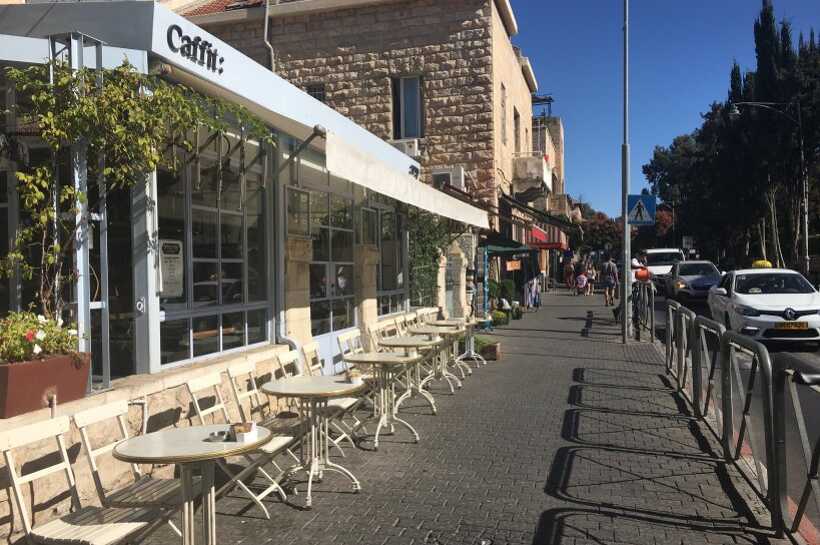 Emek Refaim street in the German Colony of Jerusalem is known for its restaurants, cafes and shops.

While many restaurants on the street have closed in recent years, and several blame the popularity of the Tachana Rishona restaurants, there still remains a wide range of choice if you’re planning to go out and eat.

Being located in Jerusalem with its high proportion of religious residents and visitors, most, if not all of the restaurants on Emek Refaim are kosher.

Kosher restaurants are generally split into two categories; Meat and Dairy (there is a Jewish religious prohibition against consuming dairy products after meat).

Caffit is a chain of dairy restaurants that like Burgers Bar got their start on Emek Refaim when they opened their first cafe on the street back in 1987.

The menu is an Israeli one, with several great salad options. Caffit effectively cater to all three meals in a day, with breakfast, lunch and dinner all available.

A new-comer on Emek Refaim, Bruno has quickly established a very positive reputation in a short term.

Considering the proliferation of high-class diary restaurants on Emek Refaim, the arrival of Bruno has certainly spiced things up...

Bagel Cafe is a dairy restaurant, which surprisingly has a clear focus on selling bagels.

The restaurant has a large bar of spreads, cheeses and other fillings for your bagels though other food (for example, salad) is available, as is take out.

There are six Bagel Cafe's in Jerusalem, Efrat and Modiin, this one sits on 54 Emek Refaim Street.

In recent years, Bagel Cafe has also established itself as one of the most popular bagel cafes to order from online, or by telephone.

Located on Emek Refaim 38, Ben-Ami Cafe is one of the most popular cafes and restaurants on the road.

With their distinctive red sign, you cannot really miss Ben-Ami, which has seating both inside and outside, on the road too.

Ben-Ami produce some fine cakes and pastries to enjoy with your breakfast or coffee. They also provide lunch and dinner, with plenty of good options on the menu.

Burgers Bar has branches all over the country, but this chain of restaurants got their start on Emek Refaim.

The original Emek Refaim branch of Burgers Bar was quite a different establishment to the chain it has now become. Nevertheless, they still do a mean burger and chips.

While they have moved from their original location, Burgers Bar still maintains a presence on the street, most recently at 31 Emek Refaim Street.

There is mainly inside seating, and also a few chairs and tables outside, on Emek Refaim Street itself.

Focaccia Moshava’s main draw is their large focaccias that you can order there.

Most of the dishes at the restaurant are meat based, but there are some vegetarian/vegan options available on the menu.

Focaccia Bar has also established themselves as one of the best options to buy food for Shabbat and Chag, ahead of time.

There are no shortage of such establishments on Emek Refaim, but Focaccia effectively turns into a small market of laid out food, on a Friday morning, or pre Chag.

Pompidou is a dairy, Italian restaurant on Emek Refaim with a large outdoor seating area.

There’s a range of food available, including the classic large Israeli breakfasts that require an extra table or two for all the things, pastas, pizzas and more.

This popular sushi restaurant had a branch situated in a beautiful arab style villa on Emek Refaim street.

In 2021, Sushi Rehavia made a move from one end of Emek Refaim to the other and now sits at Emek Refaim 31, next to Burgers Bar.

The restaurant offers a sit-down service, as well as a take out menu & deliveries. There’s a wide range of options to choose from, including non-sushi items on the menu.

Sushi Rehavia also operates a membership program that lets you collect points from each purchase that can be put towards future meals at any of the chain’s branches.

Located on Emek Refaim 43, Pizza Sababa is the primary Pizza store on the street.

With their distinctive style of a lot of toppings, Pizza Sababa has emerged as a favourite for Jerusalemites, both sitting in the restaurant and ordering to the surrounding streets.

Pizza Sababa are also one of the only pizza restaurants to offer pizza dough on their menu, if you fancy creating your own pizza at home.

Pizza Sababa have seen off plenty of competitors on Emek Refaim over the years, including Pizza Hut once upon a time.

Aldo isn’t quite a restaurant, given that it only sells ice-cream, but you can sit there and the ice cream is delicious, so we’ve included them in this list.

Aldo sells both dairy based ice cream and non-dairy based alternatives like sorbet, so if you’re keeping 6 hours between meat and milk, you can still drop in for a scoop or two.

Note: Aldo is only just about technically on Emek Refaim, as it also sits on the corner of Rachel Imenu.