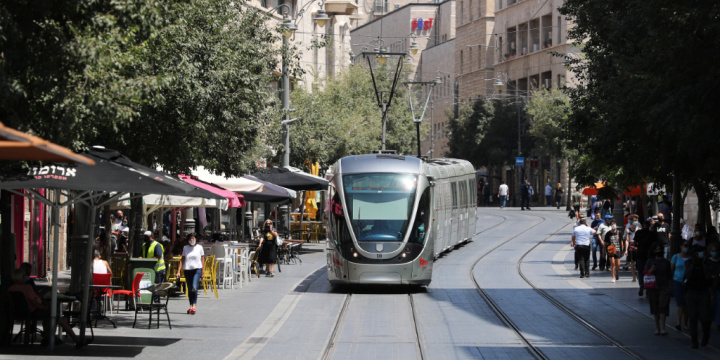 Jerusalem’s City Center has experienced a significant rejuvenation under mayor Nir Barkat and particularly since the completion of the city’s first light rail line that runs down the main street of Yafo.

This has continued under mayor Moshe Lion, who succeeded Barkat. Lion has instituted plenty of changes to the city as a whole including some of the most iconic streets in and around the centre.

The City Center is home to a large set of restaurants, cafes and bars as well as other commercial space such as offices and shops.

The Municipality of Jerusalem has its main offices located in the City Center (see ‘Kikar Safra’ below) and has big plans for the continued development of the center as a hub for the creative industries.

As might be expected for a major city, property in the City Center is mixed use, so that while there is a lot of commercial activity, there is also a lot of residential space.

These range from apartment units that can be found above the shops and restaurants to large apartment buildings and residences.

The municipality of Jerusalem has also approved the construction of several large tower blocks in or near the city center which will greatly increase the number of residential units in the area.

Adjacent to the municipality offices, this public square houses concerts and other public celebrations - most famously annual celebrations for Independence Day are held here with huge crowds coming together for Israeli Folk dancing throughout the night.

Yafo Street is the main thoroughfare of Jerusalem’s city center. Once open to cars and buses, the street has been pedestrianised for several years now, with the only traffic being the occasional light rail train or police car making their way across town.

The street is almost always busy around the clock as it is home to a large selection of shops, cafes and restaurants.

The side streets surrounding Yafo are also worth exploring as they have little gems waiting for you to discover (for example Yoel Moshe Salomon Street - see below).

Known in Hebrew as “Gan Haatzmaut” (meaning: "Independence Park") this park has pleasant, green open spaces and has a cafe that is open on Shabbat on the side nearest Agron Street.

The park is located opposite the American consulate in Jerusalem, so parking can be an issue as many spaces are reserved for the consulate’s use, but parking is generally available in nearby Mamilla.

This fully pedestrianised street connects Yafo to King George and is packed with shops and fast food outlets targeting the tour groups and students on their year off visiting Israel that this street is popular with.

There are often street musicians performing here, particularly at the junction with Yafo.

Another pedestrianised street that connects to Yafo, Yoel Moshe Salomon is home to high end shops and eateries, particularly in the ‘Kikar HaMusica” - a recently refurbished square that has several live music venues.

The street also became known for the installation of colourful umbrellas along its length.

* For more on the City Center, see our guide to Jerusalem City Center real estate prices.