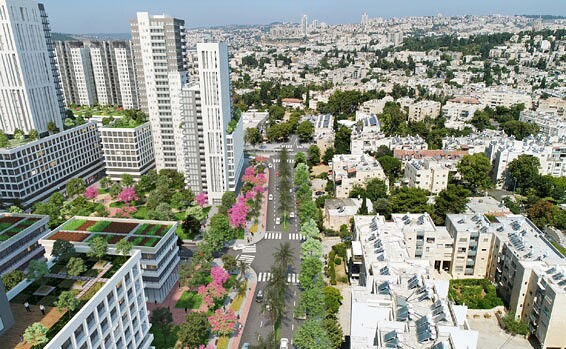 Talpiyot is located on the south-eastern border of Jerusalem.

Living in Jerusalem, you will almost certainly end up in Talpiyot, to do some shopping.

Whether it be the Hadar Mall, or the many car showrooms or kitchen shops, there is for sure something for everyone in Talpiyot, particularly in the industrial zone.

Established in 1922, long before the state itself came into existence, Talpiyot is a key area in Jerusalem and houses one of the largest industrial zones in the country.

Talpiyot is unique in Jerusalem, since it is the only neighborhood in Jerusalem that was planned as a "modern city".

The original plan was to create a "modern Jewish city" alongside the Old City that could compete with the prestige of the latter, and would be an attractive alternative for those looking to live in Jerusalem.

Talpiyot literally means "Turrets" or "magnificently built". It is also a reference to the Temple, and whilst it has a totally different feel it is still within walking distance to the Old City.

The biggest change for Talpiyot came after the Six Day War with the relocation of the border line. As a result, a great deal of real estate interest emerged in the 1970s and the character of the neighborhood changed completely.

In recent years, there has been a huge amount of construction work in Talpiyot, with many housing units added.

Next to Baka, Talpiyot has a totally different feel due to its industrial nature and the high proportion of malls and shops.

The range of shops in Talpiyot is hugely extensive. There is a wide range of restaurants as well as house repair, auto-repair shops and kitchen showrooms.

Across four or five large roads in Talpiyot, you really should be able to find whatever you are looking for, and there is no shortage of places to stop for lunch too.

So Many Malls in Talpiyot!

Talpiyot is also home to many malls (shopping centres) as well.

In addition to the malls, there are also large stores and shops all around Talpiyot, including those selling sports merchandise and electrical goods.

There are also plenty of real estate options in Talpiyot, with a number of new buildings emerging in the area.

With plenty of hi-tech companies located in Talpiyot and with good public transport within the area and also the amenities that are on your doorstep, it is a great area for young professionals.

In non-Covid times, Talpiyot has also established itself as a place for fine evening entertainment with the famous Haoman 17 nightclub probably its most famous destination for young people.