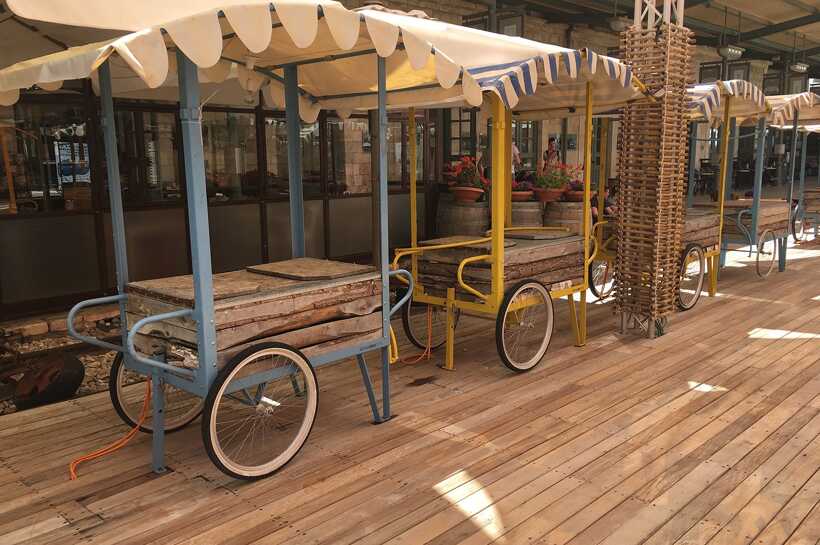 A Guide to the First Station (Tachana Rishona)

The Tachana Rishona (First Station,  Mitcham HaTachana) is a leisure complex created on the site of the former Ottoman era train station, the first in Jerusalem, hence the name.

Today, it’s a bustling concourse, full of restaurants, shops and activities and as a boon for tourists and non-religious residents, it is one of the very few places open for business on Saturdays in the city.

Sadly, from an architectural point of view, the lovely old train station building is largely hidden by the plethora of shops and the large marquee type area, that while previously used to be present solely during the rainy season, now seems to be employed year round to provide respite from the summer sun too.

Fortunately, you can still see the building in it’s entirety from the David Remez Street entrance.

There are a number of large car parks available to visitors to the Tachana - one located on Derech Beit Lechem on the North Western side of the complex, the second accessed via Derech Hebron to the South of the site.

There are opportunities for free parking on the street, but some of these are time dependent, so be careful to check the signs in the area that you park.

A new parking area has emerged thanks to changes by the Iriya, there is now paid parking opposite the First Station in front of Liberty Bell Park, by the Petrol station, on the corner of Emek Refaim.

Shuttle to the Kotel

A free shuttle is operated from the southern car park that will take you to the Wailing Wall and back.

The Tachana has a busy calendar of activities. On a daily basis, there are a number of classes that are held there, ranging from Yoga & Tai Chi to dance classes & outdoor film screenings.

In addition to this, though not on a regular schedule, the First Station is home to a number concerts and festivals, including Jerusalem’s Annual Beer Festival.

Exit out of the Station to David Remez Street and turn left and you will come across a delightful hole in the wall that leads to the Kahn Theatre. For more information, see our guide to Jerusalem’s Theatre scene.

Over the road from the Southern Car Park on the corner of Derech Hebron and Naomi Street is the Yes Planet Cinema Complex.

Inaugurated in 2014 and built at a cost of around 10m NIS, the skate park in Liberty Bell park is the first of it’s kind in Jerusalem.

Zappa is an events venue tucked behind the First Station which (along with places like the Yellow Submarine) is an integral part of the live music scene in Jerusalem.