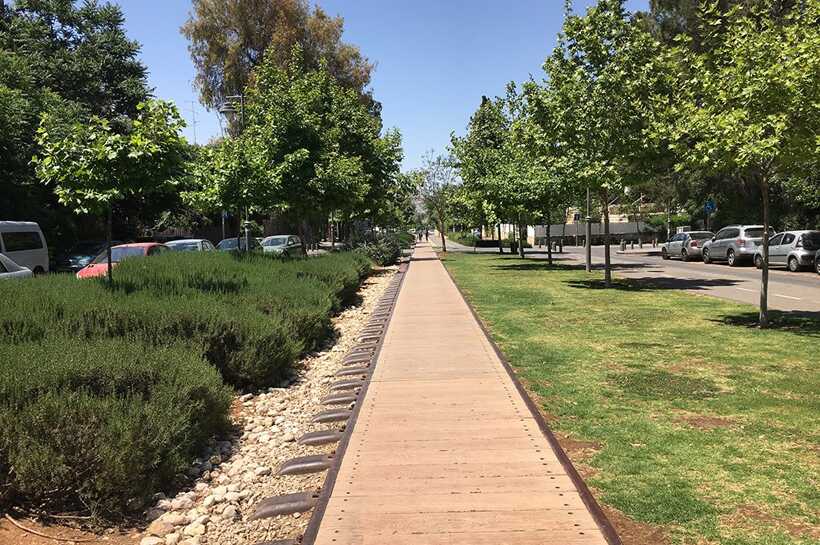 Both former railway tracks that fell into disuse and in recent years have been converted into a park for use by local residents.

The track comprises both a two lane cyclepath, and a pedestrian track that is built on the old train tracks themselves in a nod to the park’s former life.

The track looks like wood, but if you pay close attention to the patterns, you’ll find repeats, which will tip you off that it’s actually a set of concrete tiles.

The former track winds its way from the First Station complex, between the neighbourhoods of Baka and the German Colony, through Talpiot and ending at the current train station at Malcha.

Along the route, as it winds through the city, the path is decorated with trees, bushes and grassy areas, though the most effort on beautification seems to have been expended on the part of the route between Derech Bet Lechem and where it crosses Pierre Koenig.

For a more detailed look at what’s on offer check out our profile of the Tachana Rishona. 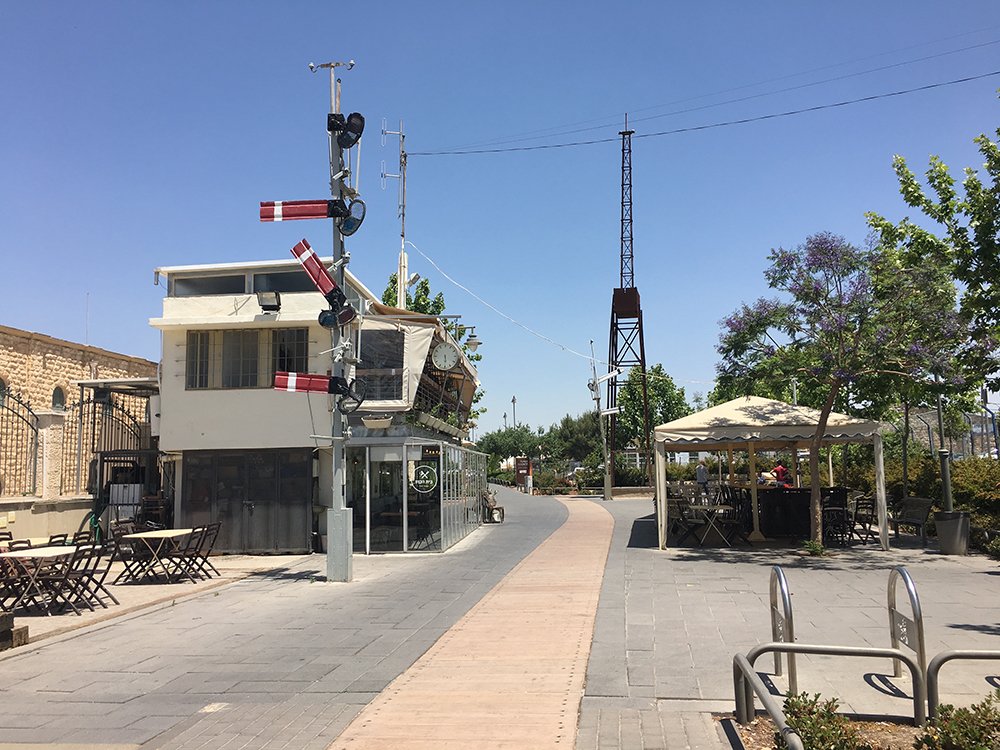 This is a cool (kosher) restaurant that has been built in an old signal box and is located close to the Tachana Rishona, between the complex and where the route crosses Derech Bet Lechem.

Due to its location it is also a good place to meet and is just besides one of the car parks for the Tachana Rishona. On the crossroads of the park and Derech Bet Lechem there’s a small kiosk with picnic tables where they make fresh juices.

In the Summer months - right by the juice bar, a somewhat innocuous looking wire across the way turns into a refreshing set of sprinklers, the gentle mist providing a welcome break from the summer heat. 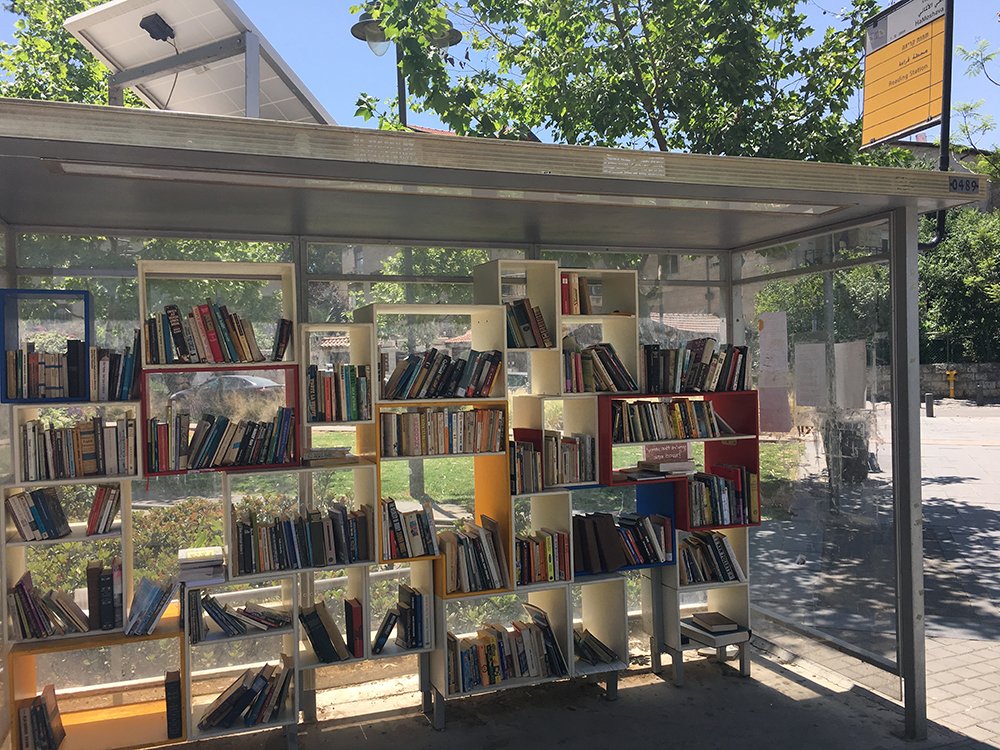 An initiative of students from the Bezalel College of Art and Design, these former bus stops have been converted into free public libraries.

Come bring your old books, and find something new to read!

This initiative has proven to be very popular and there are a number of these "book bus stops" throughout Park Hamesila.

Close to where the Rakevet crosses Pierre Koenig, a small area has been set aside where they have installed a set of outdoor exercise machines and a playground.

Besides the exercise machines and equipment, you will see plenty of recreational runners on Park Hamesila with a great route to run from the First Station all the way to Malcha Station.

In 2021, the work on the Light Rail was completed allowing a straight no-stop route from the corner of Pierre Konig all the way to past Malcha Station. 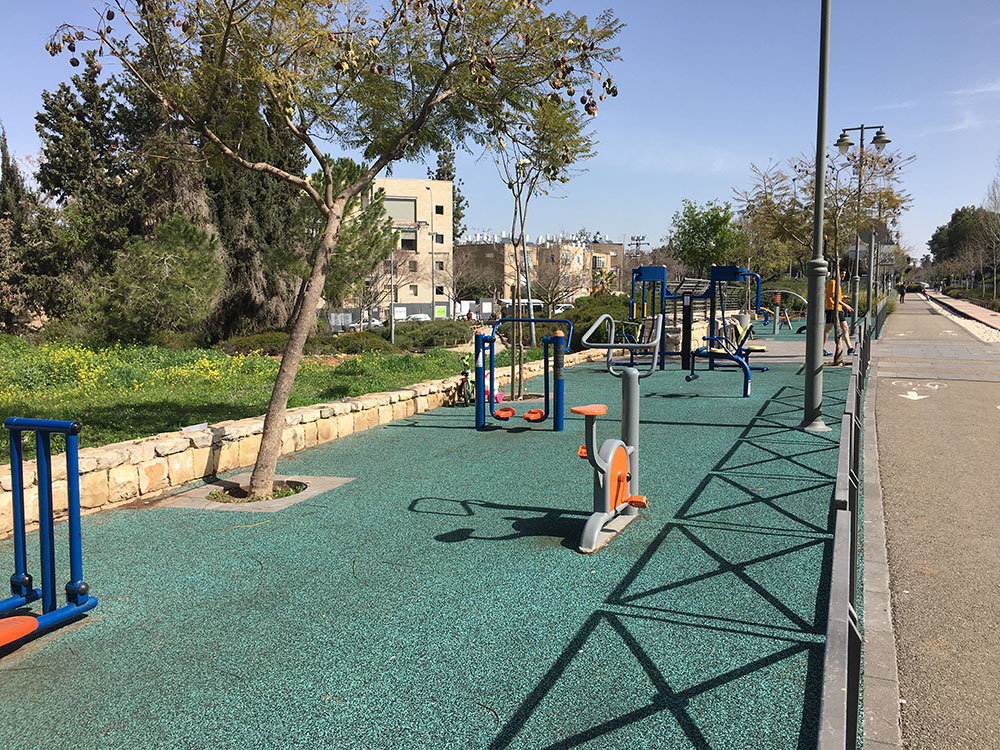 A new park has been built in 2016 near the Rami Levi store that looks out over the Park HaMesila. It has a ‘motocross’ style bike track for kids, playground, stream, toilets and an amphitheatre.

For more details, see our in depth guide to Park Gonnenim.

The park is over 7km long and does not have residential units along its whole length.

The most built up (and desirable) area is currently between Derech Bet Lechem street and Pierre Koenig street. Within this stretch of the park, there are some extremely luxurious properties to be found.

There are also many plots that contain properties suitable for redevelopment - prices are high, so if location is more important than cost, this may be something worth looking into (for enquiries regarding opportunities in this neighbourhood, please email ben@capitil.com).

We have seen a lot of interest in HaMesila - a luxury project in the German Colony.

The history of the train line in Jerusalem is an old one, though in Jerusalem ‘old’ can sometimes lose meaning.

Opened in 1892, the Jaffa-Jerusalem railway was one of the first constructed in what would become Israel, and ran for over 100 years until August 1998. The former station became abandoned for many years until 2013, when it was refurbished to become what locals now refer to as the First Station.

The route itself is littered with references to the old trainline, with posters and plaques depicting images of the old trains in operation as well as descriptions of specific events (for example visits by important dignitaries).

There’s also one of the old carriages in the children’s area in the First Station, though it is now used as an office rather than for passengers.

The First Station was where the line used to terminate after arriving in the city (going via the current station in Malcha, which is why the park terminates there).

There was discussion of reviving the route for use in the light rail network, but the plans to convert the area into a park won out.

Not much happened with regard to the light rail routes, until around 2016/2017 when plans to build the proposed Blue Line down Emek Refaim were met with fierce resistance from the businesses located there who attempted to divert the path back to the Park HaMesila.

At the time of writing, and despite plenty of protests and much legal wrangling, these efforts seem to have had no effect on the municipality’s plans and for now, the park will remain a park.

All available properties for sale in Jerusalem can be seen here. Please also try our Projects in Jerusalem page or Jerusalem luxury apartments for sale rundown to get a fine overview of the Real Estate situation in Israel's capital city.