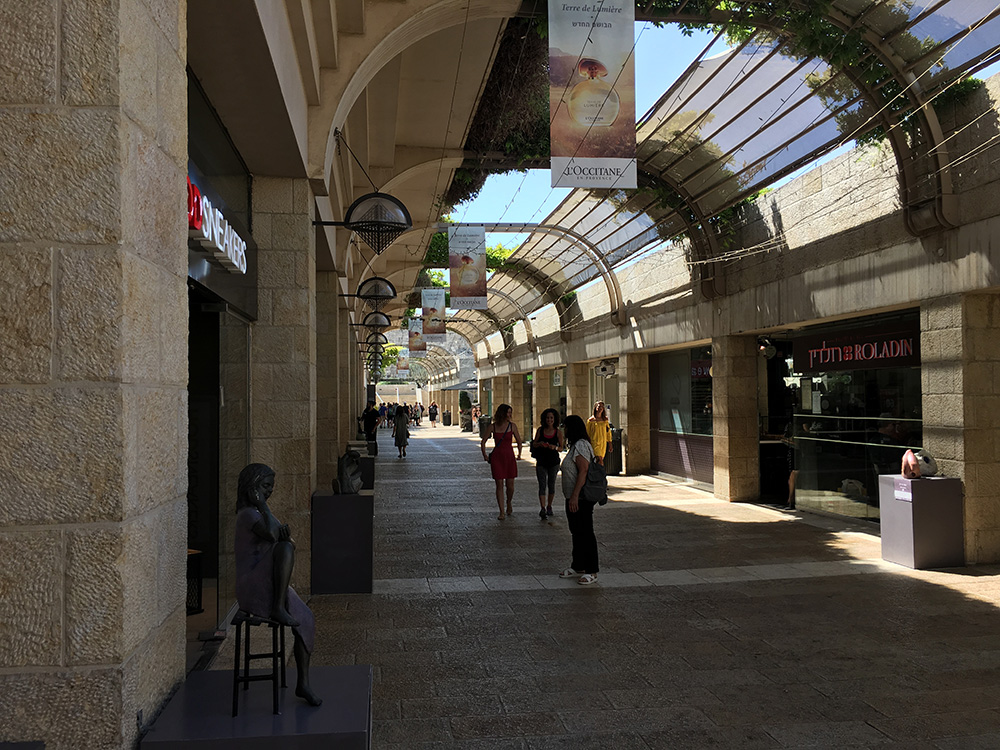 Widely known as a high-end shopping arcade, Mamilla acts for many visitors as the route to visit the Old City (at least from the Western part of Jerusalem), helped by both the positioning of its southern entrance to perhaps the 4 ‘best’ hotels in the city* which enables it to capture high-end tourist foot traffic, together with the large amount of underground parking available for visitors in close proximity to the Old City. It’s also close to Jerusalem’s City Center, which also helps.

Above the shops and restaurants are some spectacular luxury apartments, some of which cost upwards of $10m - clearly not targeted at your average Jerusalem resident! However, there aren’t that many luxury developments located so close to the Old City to choose from, the others being the residences at the Waldorf Astoria and the “Kfar David” (David's Village) project that runs parallel to Mamilla itself.

*Which, in alphabetical order are: the David Citadel, the King David, the Mamilla Hotel and the Waldorf Astoria.

Walk down Mamilla and you might notice a building with lots of numbers drawn on each brick (see the image right at the top of the page). Unusual right? Well, those numbers are there because they dismantled the building and rebuilt it as an integral part of the Mamilla complex. Why the numbers are still there after so many years is another mystery, but perhaps in keeping with the oldest of Passover traditions, it is so that the children ask questions.

What’s so special about that building? (another question - see, it’s working!) It hosted a visit from Theodore Hertzl, the founding father of Zionism and the Jewish state as he attempted to lobby the German Kaiser who was also in Jerusalem on an official visit at the time.

Remarkably, Hertzl only stayed for 4 nights, but still there was an outcry when the building was scheduled for demolition as part of the regeneration project. This led to its dismantling and eventual reconstruction, whichrequired the numbering of its building blocks; taking us back to where we started from. There is also a small museum commemorating the four day visit on the ground floor of the building. 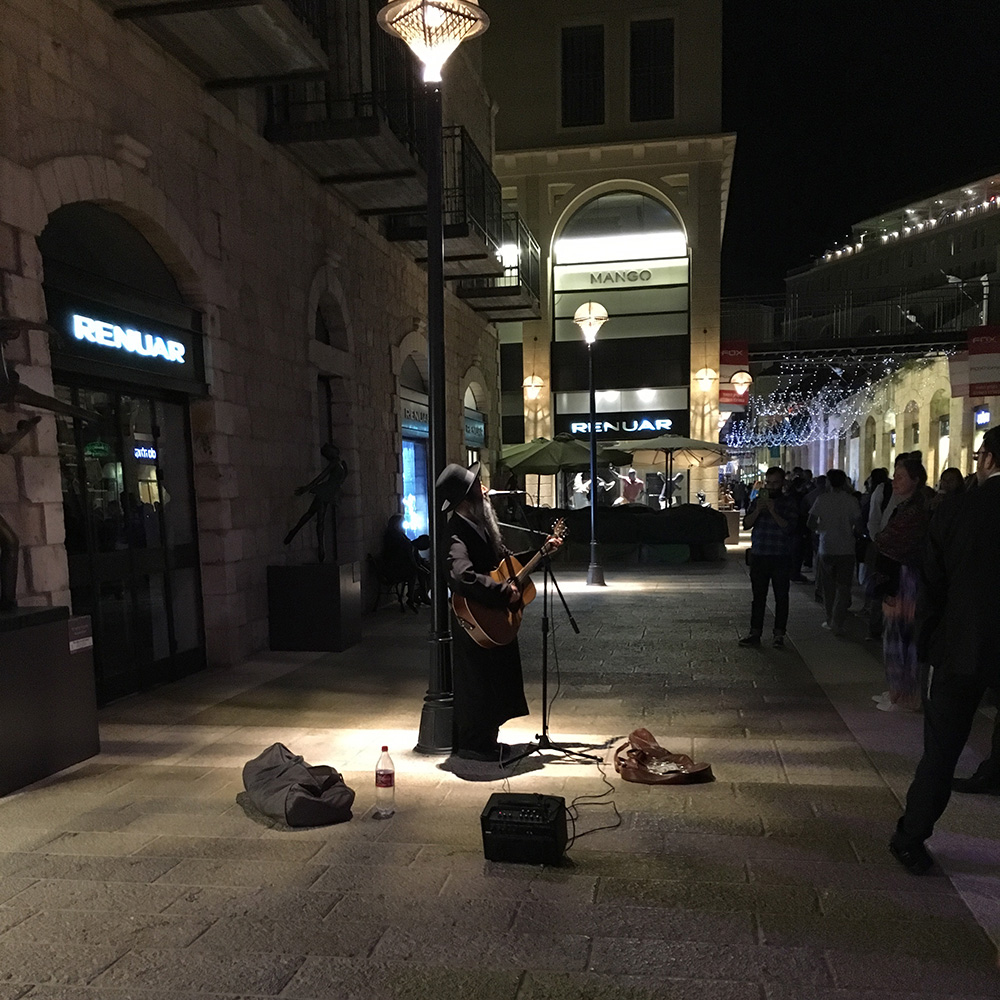 The large numbers of tourists and locals coming to shop at the high end stores, or even just pass through attracts a regular stream of street performers, musicians and other stalls (e.g. balloon sculptures). These can range from some kids playing guitar after school to some great and unexpected performers (there's a guy that plays guitar in the full hassidic garb who is amazing).

All along the length of the pedestrianised arcade, as well as inside the central mall building, Mamilla showcases a range of art and sculptures that are available for sale. These change on a regular basis and so if there's nothing that takes your fancy the first time, it's worth coming back a few months later to see what has changed. 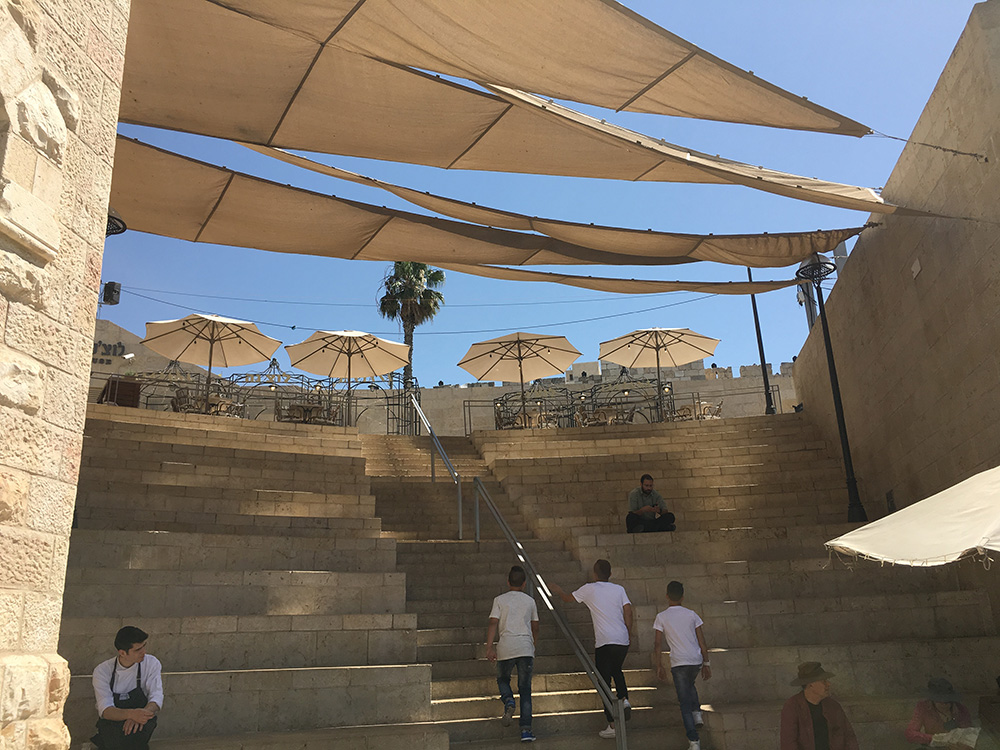 There's a shaded amphitheatre style seating area about halfway along the length of Mamilla. This faces out to a large circular area that often attracts street performers.