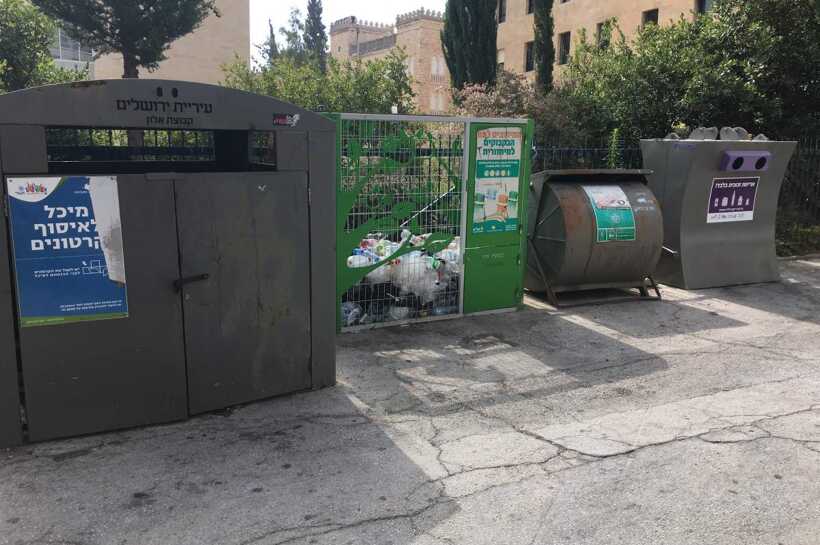 "An optional activity rather than a mandatory requirement"

Recycling, while commonplace in many parts of the world, isn’t a huge priority for most in Jerusalem, and is an optional activity rather than a mandatory requirement.

Garbage collection in Jerusalem is done via large communal wheelie bins rather than on a per house or per building basis, and recycling is the same.

There’s a large recycling center in the Atarot Industrial Zone just outside of the city, which according to an article by the Jerusalem Post accounts for around 28% of the plastic recycled in the city.

The most common recycling facilities that you will see on most street corners are the plastic bottle recycling cages. These also often have a smaller container located on the side of the cage for batteries and another for plastic shopping bags.

Alternatively, many supermarkets will allow you to return your empty bottles to them in order to redeem the ‘pikadon’ (deposit) that has already been paid on each bottle, around 30 agurot.

In Jerusalem, the paper recycling is a short grey cylinder that almost looks like a drink can on its side, with a slit at the top. They are often found adjacent to the plastic bottle cages on street corners.

Like plastic, each glass bottle has a ‘pikadon’ (deposit) value associated with it. Usually this is 30 agurot, but there are some that are worth 1.20 (generally larger beer bottles).

If you want to reclaim these deposit amounts, you’ll need to return the bottles to a supermarket or to another store that accepts them (often alcohol stores will). Some supermarkets even have automated machines where you can do this.

A relatively new addition to the glass recycling infrastructure in Jerusalem is the bottle banks that have started to be rolled out. You won’t get any of that deposit money, but if you only have the occasional bottle to recycle and it’s more hassle to take it with you to the supermarket, these are a great option to putting them in the regular trash.

These are not yet commonplace, but are appearing in more and more locations, generally near existing recycling recepticles.

These are rarer, and tend to be found near to shops. It’s less of a container and more like a miniature shed with an opening into which you can throw the boxes.

These are the rarest, but there are a number of places where you can take your biodegradable waste for composting. These can be a bit tricky to spot as they tend to be a little out of the way. Composting bins are generally found in parks and open areas and are marked as such.